Number of NDIS participants and providers are skyrocketing - what does this mean for the future of the scheme?

The number of Australian participants receiving NDIS help has skyrocketed to almost 200% over the past five years, while the number of providers has only just doubled, barely keeping pace with demand in some states.

Despite the challenges COVID-19 threw at us, in the 12 months to June 30 this year, the National Disability Insurance Scheme (NDIS) continued to grow with 466,598 participants with approved funded plans on its books nation-wide, an almost 19% jump from the 2019-20 year which recorded 391,999 participants.

As of June 30, those 466,598 NDIS participants received support from around 27,700 active NDIS providers that employed around 270,000 workers across 20 occupations. 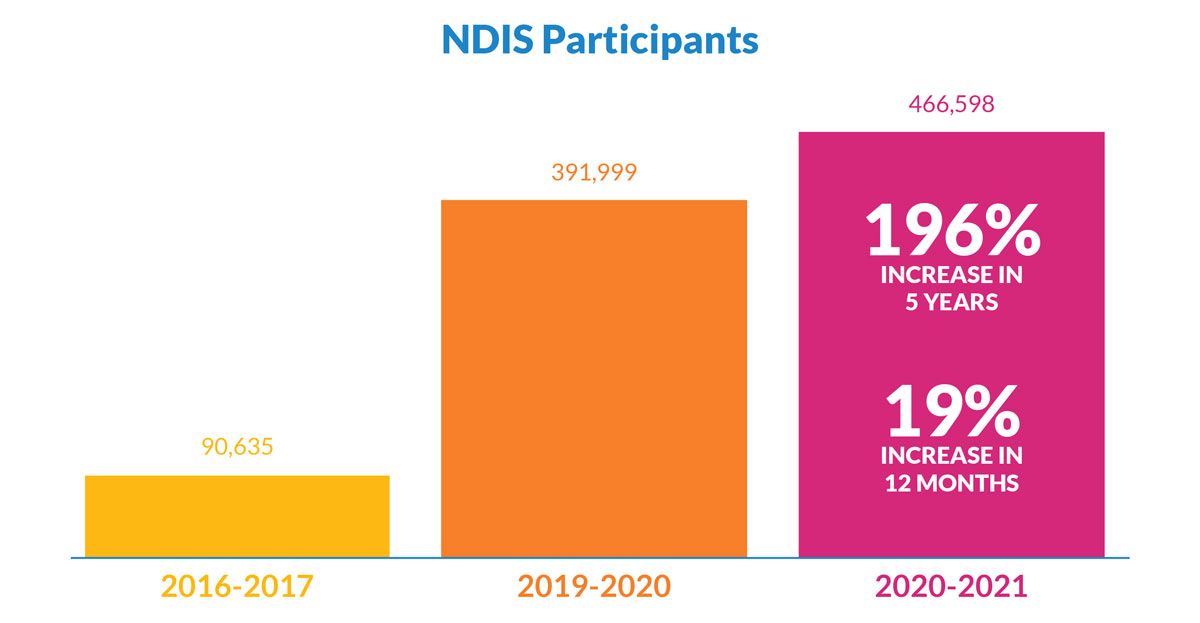 So while each support worker currently has 1.7 clients to take care of, by 2024 it’s expected there will be more workers on the scheme, each with just 1.4 participants on their books.

And that figure will only continue to grow, along with the number of NDIS providers and workers.

While substantial participant growth was always expected as the scheme rolled out to include all states and territories, there has not been such a rapid growth of the number of businesses in the provider sector, to date.

The number of registered NDIS providers is steadily growing, however - 8698 businesses to June 2017, compared to 16,526 in June this year - a rise of 62% during the same five-year period. 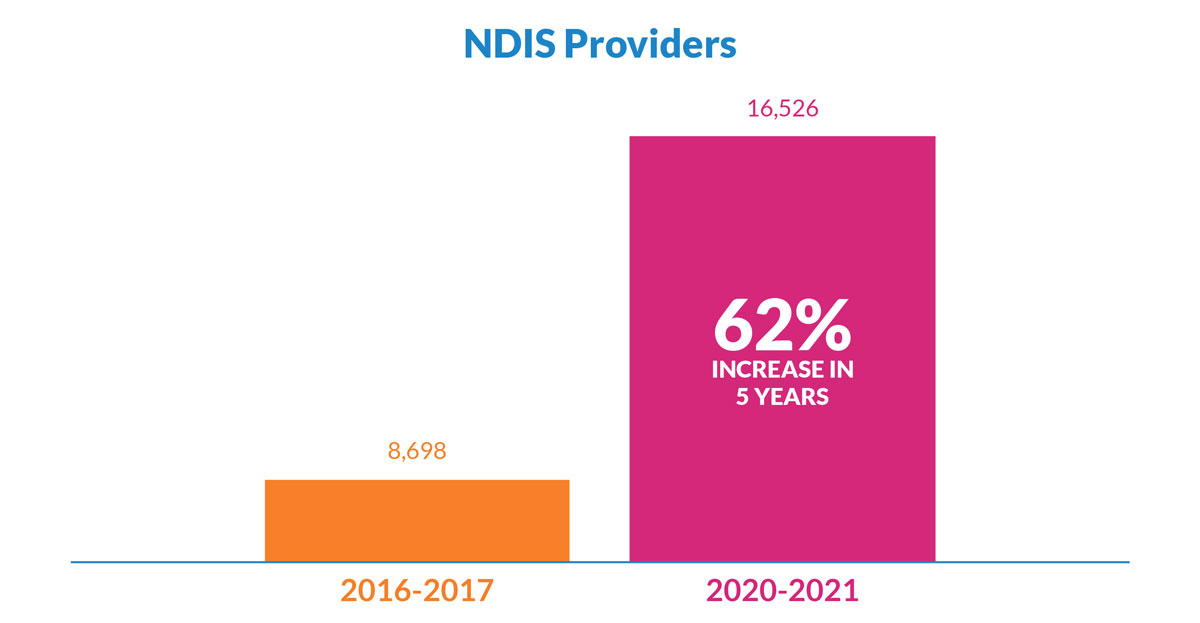 Throw in the above projected figures of 353,000 workers for 500,000 participants and it looks like participants will be well taken care of as provider numbers increase. 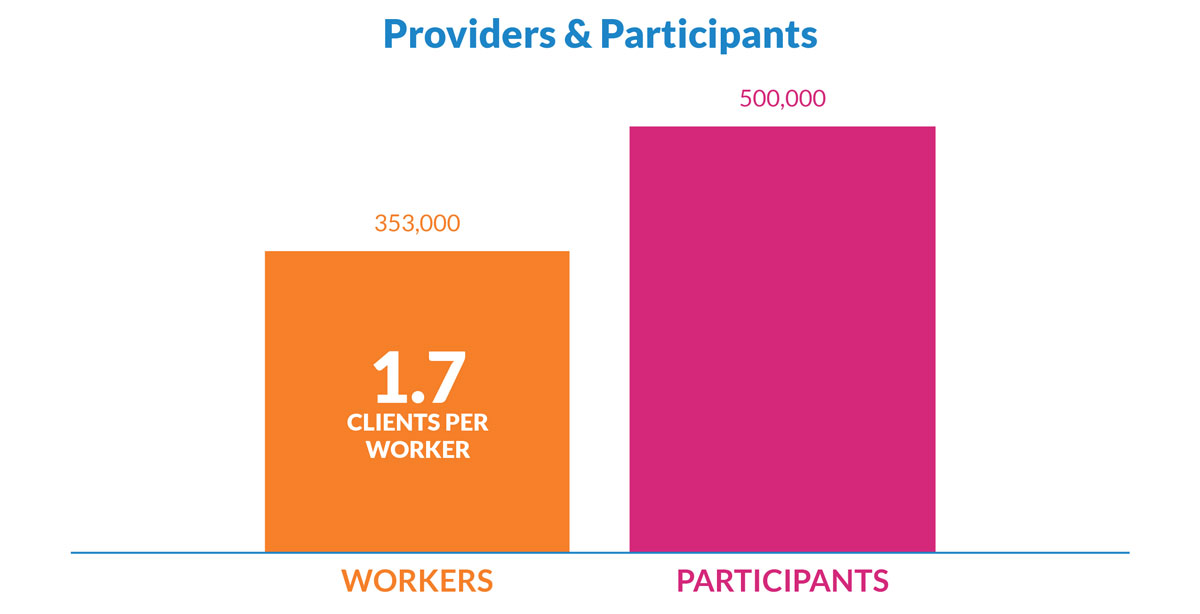 The NDIS 2020 Year In Review  showed more than $20 billion was paid to providers to deliver participant support throughout the year. It also showed:

Back when the scheme was being rolled out across Australia in 2016, it was projected to cost around $22 billion by 2019 and helping 460,000 participants.

According to latest data from the NDIS, that projection has only now been realised with 466,619 NDIS participants on the books for the 2020-21 year, averaging payment per participant of around $69,000. This average has risen steadily by around 12% a year over the past four years.

But what does this mean for the future?

Also, the 2021–22 Portfolio Budget Statement (PBS) for Social Services has forecast the NDIS to reach $33.3 billion in total costs (of which participant support will account for about 96%) by 2024–25, over half of which will be provided for by the Federal Government.

The National Disability Insurance Agency (NDIA) flagged in its 2019 Annual Report that the Scheme will reach 532,000 participants, or 2.3% of Australia’s estimated resident population, by June 2023.

As pointed out by the NDIA back in 2017, early indications were that most NDIS participants were accessing more support under the NDIS than under the previous disability system, including more hours of support, a wider range of support and greater access to equipment.

Even back then, the NDIA flagged cost pressure concerns throughout the roll-out of the NDIS, noting the Scheme came in either at cost or lower every year, due to the masking of costs caused by low plan utilisation rates coupled with high cost packages.

Each state has experienced a small surge in provider numbers, year on year. Current statistics show: 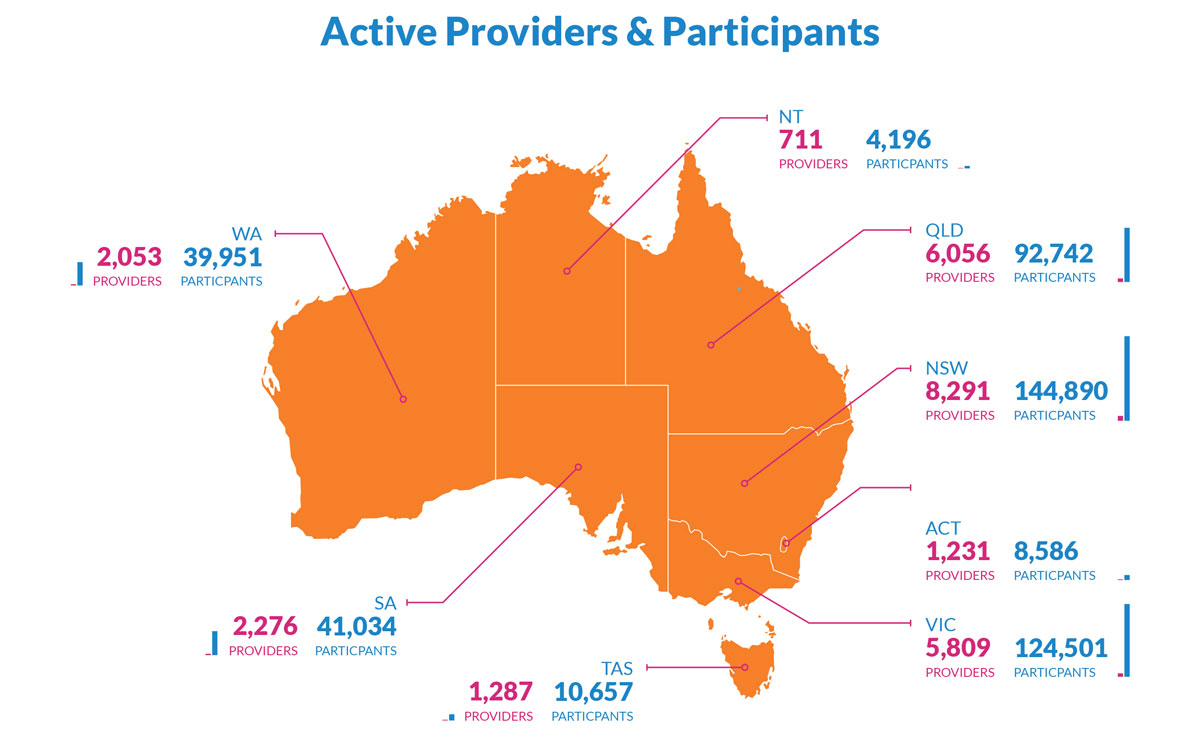 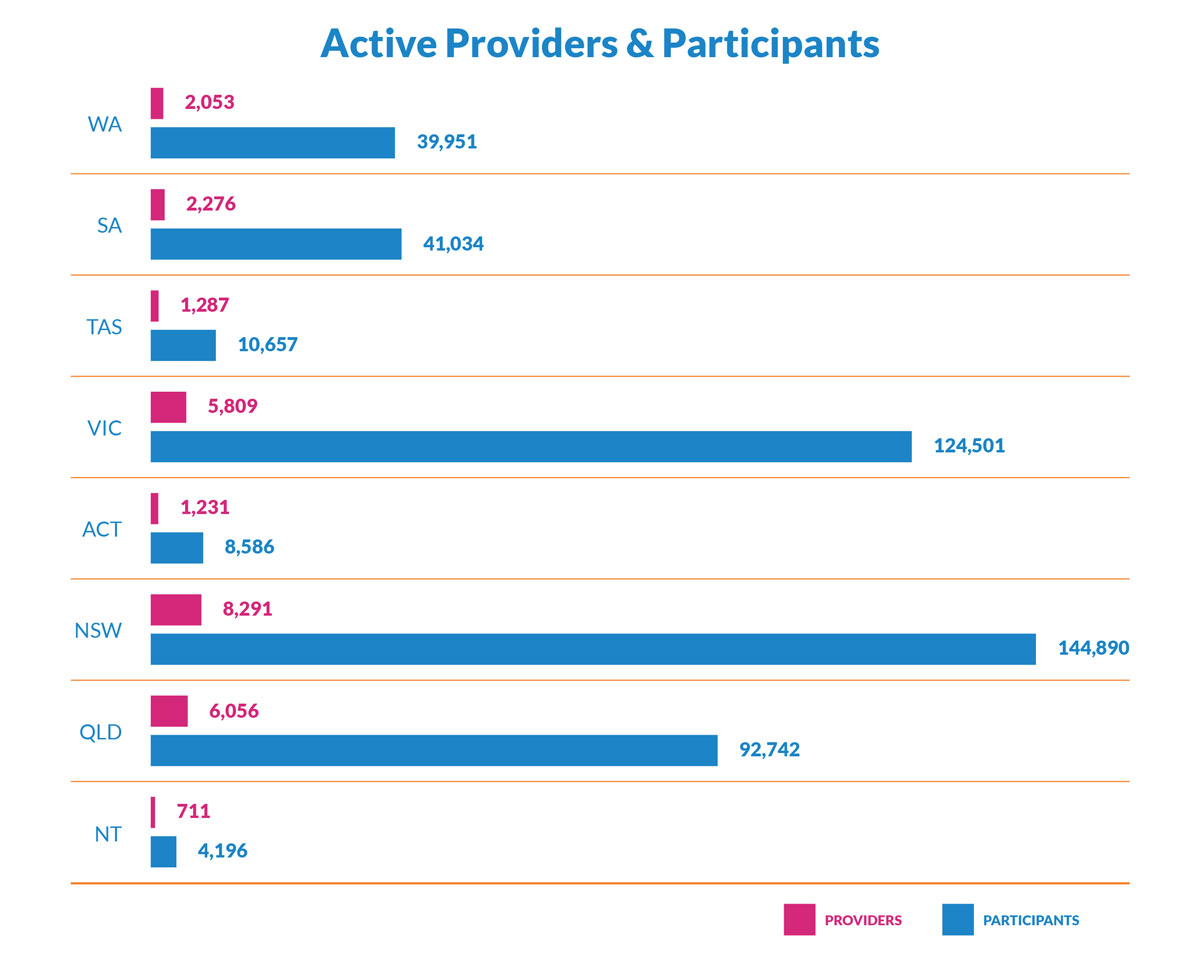 It is interesting to note Western Australia has the nation’s highest provider per participant figures of 19.5 participant per provider, followed by South Australia with 18, New South Wales with almost 17.5 and Queensland with 15.

The average payment per participant has continued to increase at 11.8% yearly in the three years to June 30 this year, which the NDIA considers an unsustainable level of increase.

As the national roll-out of the NDIS is now complete, plan utilisation has, of course, increased as existing participants improve their plan usage as the longer a participant is in the Scheme, the more they tend to use their plan, but the pandemic has had a great impact on their ability to spend their funding.

It will be interesting to keep an eye on Federal and state budgets versus funded plans, and the pace of providers per participant over the next three years to see where the predictions take us.

And as vaccination marks around the country creep up to the magic 80% mark, participants will be marking the days off, anxious to get out there and seek services and connections.

Which makes our Disability Connection Expos 2022 perfectly timed and such a vital tool for providers and exhibitors to connect with new and valued clients and for participants to get out there and spend their NDIS plan funds.

Confidence rises with almost 70% of Aussies tipped to be vaccinated against COVID-19 by next month.

Freedom for NSW with Victoria on the road to recovery