Carol Cooke is a three times Aussie gold medal paralympian, nine times World Champion in cycling, philanthropist and founder of the MS 24 hour Mega Swim, a motivational speaker and can add author to her growing list of accomplishments!

Carol Cooke AM inspires us to believe that nothing is impossible if we dare to face our fears and believe in ourselves, and in her new book Finding Your Inner Gold she imparts just such wisdom.

In this second edition of her original book, Cycle of Life, Carol shares her secrets to finding your inner gold, overcoming adversity, accepting change, finding your hidden courage and creating a winning mindset.

She believes that if you dare to face your fears and believe in yourself you can overcome anything.

And as if Carol’s feats were not magnificent enough, did we mention that after 41 years of training, two countries, three sports and one devastating diagnosis, Carol’s dream of winning a gold medal came true at age 51!?

Carol was born and bred in Toronto, Canada, where she served on the Toronto Police Force in Canada for 14 years.

Carol fell in love with an Australian, married and moved halfway around the world and settled in Melbourne. After competing in Hobart at the Masters Swimming Nationals in 1998, she awoke one morning with disturbing balance problems and double vision and was diagnosed with Multiple Sclerosis (MS).

Having only been married for three years and with no immediate family around, her thoughts revolved around how she was going to cope with this unpredictable disease.

Fortunately, Carol found the determination and spirit to defy what the devastating future the doctor had presented to her.

Carol was a national level swimmer in Canada and took up competitive rowing in 2006, making the Australian Rowing Team in 2008 and 2009 where she competed at the World Rowing Championships. She has held a scholarship at the Victorian Institute of Sport since 2007 and in 2011 took up the sport of para-cycling in the trike class.

Carol was named on the Australian para-cycling team to compete in Denmark at the Para-cycling World Road Championships in 2011 where she won two silver medals, and in 2012 was named in the Australian Team for the London Paralympics. There, she beat the men to win a gold medal in the mixed T1-T2 road time trial.

At the end of 2012, Carol was ranked number one in the world in the Female T2 category and in 2013 became dual World Champion, winning both the Time Trial and the Road Race.

In 2014 she was made a Member of the Order of Australia for her contribution to sport and philanthropy.

In 2016 Carol was named on the Australian Paralympic team for Rio and came away with two gold medals in the Road Time Trial and Road Race.

In 2017 Carol once again became a dual World Champion, retaining her #1 ranking and to cap off an amazing year was awarded the top award at the Victorian Institute of Sport – The Award of Excellence. She continued to race with another two World Championships in 2019.

Although living with the never-ending symptoms of MS, Carol has the strength and courage to get up each day with a positive and motivated attitude. She has learnt to live for today and not worry about what may or may not happen in the future.

Carol supports others living with MS to fulfil their dreams through her initiative, the 24 Hour Mega Swim.

Since its inception in 2001, the event has raised more than $11 million and has provided more than 1000 Go for Gold Scholarships in the areas of employment, education, travel, the arts, sport and music. 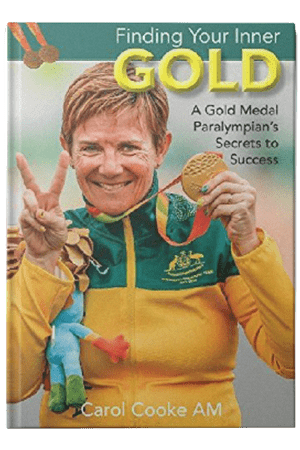 Chill out and discover new paths at Brisbane Expo!

Be loud, be heard - Defend our NDIS

NEW TO THE NDIS? Three ways to manage your NDIS plan funding

The national survey for NDIS participants, family and carers is now open