Alysia Kaiser has muscular dystrophy and she’s also an author

Disability advocate Alysia Kaiser has a rare form of muscular dystrophy but she hasn’t let that devastating diagnosis stop her - she’s about to launch her first book!

In The Girl Behind The Mask, Alysia shares her life experiences prior, during and after being diagnosed with a rare form muscular dystrophy - the “normal” struggles most people face during their lives in addition to the ones she faces while being disabled.

At only 33 years of age, the Victorian woman shows us just what determination and gratitude can achieve.

In the book, Alysia takes readers on a journey of her own self-discovery, demonstrating that she is not defined by her condition and does not let it confine her.

It was when doctors told her she would not survive that she learned to be grateful and appreciate what she was capable of doing, rather than focus on what she wasn't.

This brave, tenacious, wheelchair-bound, ventilator-dependent woman encourages us to never take what they have for granted as circumstances can change in the blink of an eye.

She urges readers to see people beyond their appearance or situation.

And she doesn’t let government red tape get in her way.

Despite her disability, Alysia has shown great strength and determination, turning to the media in 2018 to fundraise for her own electric wheelchair when government bureaucracy made it almost impossible for her to get one.

She has also appeared in newspapers and television to fight for the rights of all people living with a disability after government promises fell short.

Alysia says there needs to be adequate funding for support for people living with a disability to have a quality of life under the NDIS (National Disability Insurance Scheme) and “sadly is still yet to provide”.

To order The Girl Behind the Mask, head to Booktopia or Amazon. 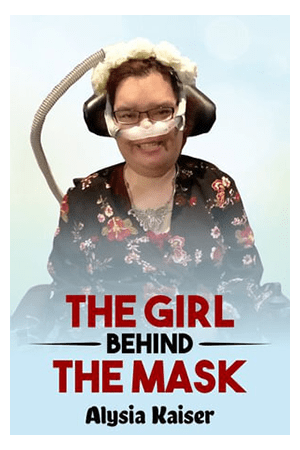